July 2019 – January 2022
Storm King Art Center is delighted to present the first US exhibition of internationally renowned sculptor Mark di Suvero’s E=MC2 (1996-97), which at 92 feet and 9 inches is the tallest sculpture by the American artist to date. Created in di Suvero’s studio in Chalon-sur-Soâne, France, E=MC2 (1996-97) was previously shown in Paris in 1997 as part of a two-year-long citywide exhibition of the artist’s work and has been on display in Valenciennes, France for the past 10 years.

Widely regarded as one of the most important American artists to emerge from the Abstract Expressionist era, di Suvero remains a prolific artist today with a career spanning more than sixty years. The exhibition of E=MC2 (1996-97) at Storm King continues an unparalleled five-decade-long dialogue between the artist and the Art Center, in which 50 of di Suvero’s works have been exhibited. The new work, made from steel beams and standing nearly 100 feet tall, has been sited alongside eight other examples of di Suvero’s large-scale sculptures from various stages of his career currently on display in the South Fields and adds a new dimension to a historic vista at Storm King.

As one of the country’s preeminent sculptors, di Suvero’s work has been an integral part of Storm King Art Center’s permanent collection since 1968 when Ralph Ogden, one of Storm King’s co-founders, and the grandfather of current President John P. Stern, purchased the Art Center’s first di Suvero sculpture. In 1976, Storm King Art Center became a temporary home to five of di Suvero’s large-scale works that had been exhibited throughout New York City’s five boroughs as part of the artist’s historic 1975 retrospective organized by the Whitney Museum of American Art.

Since then, Storm King has collaborated with di Suvero on four landmark exhibitions including a twenty-five year retrospective of sculptures and drawings in 1985; a ten-year retrospective in 1995 and 1996 that included a group of di Suvero’s paintings shown in the United States for the first time; a unique exhibition highlighting di Suvero’s relationship with his longtime gallerist and friend Richard Bellamy in 2005 and 2006; and a major exhibition of outdoor works sited on Governors Island in New York in 2011 and 2012. Most recently, Storm King published the first comprehensive monograph of the artist in 2015.

In a recent interview with the artist documented by the Art Center as part of an Oral History archive, Mark di Suvero said, “Having a piece at Storm King is like having jewels in velvet. You look at it, and you feel the goodness of the landscape, of the sense of space, the sky that comes with it…” David R. Collens, Storm King’s Director and Chief Curator, adds, “Di Suvero’s bold, open, steel sculptures and the broad expanses of Storm King seem made for each other—together they create a unique environment in which the dynamism of art and nature reinforce one another. We’re thrilled to add E=MC2 (1996-97) to the di Suvero works already on display at Storm King and offer our visitors a chance to experience this monumental work within the backdrop of our unique Hudson Valley landscape.” 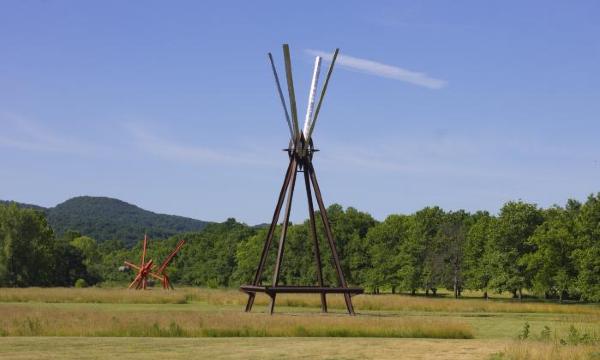