Storm King Wall—Andy Goldsworthy’s first museum commission for a permanent work in the United States and his largest single installation to date—exemplifies his nature-based methodology, which includes building this and other dry stone walls that draw on British agricultural tradition. Storm King Wall was originally imagined as a 750-foot-long dry stone wall snaking through the woods, but when it reached its planned endpoint, at the foot of a large oak tree, it seemed only natural to the artist for the wall to continue downhill to a nearby pond. Soon after the wall’s trajectory was extended again; it now emerges from the other side of the pond and continues uphill to Storm King’s western boundary at the New York State Thruway—totaling 2,278 feet overall.

The work was built, in some parts, stone-by-stone upon the remnants of an old farm wall that Goldsworthy found in the woods overlooking Moodna Creek, at Storm King’s eastern boundary. Rising to a maximum height of about five feet, it follows a path the artist chose—winding through a row of trees that grew from seeds to saplings to maturity in a line alongside the original, dilapidated wall. Goldsworthy has speculated that these trees played a role in the slow collapse of the farm wall, and thus the new wall’s path winds through the trees instead of alongside them.

While Goldsworthy conceived Storm King Wall and supervised its construction, the roughhewn structure was built by a team of British wallers, who explained to Storm King staff exactly what kinds of stone to harvest and sort in preparation for their work: chunky foundation stones, a smaller, rounder variety for the wall’s midsection, large “through stones,” and flat cap stones for the top layer. The British team built the wall by placing one stone on top of another while chipping and shaping each one to fit snugly; no concrete was used in stacking the wall’s 1,579 tons of fieldstone. The stones can be as captivating as the wall itself. 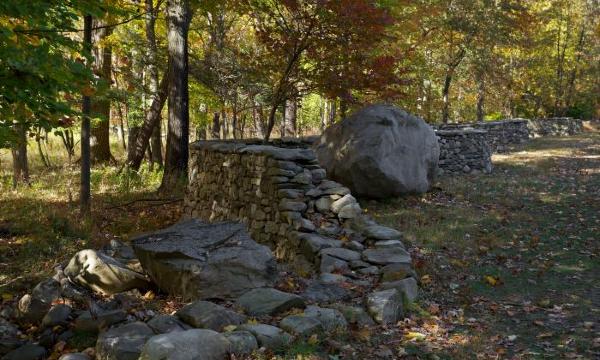