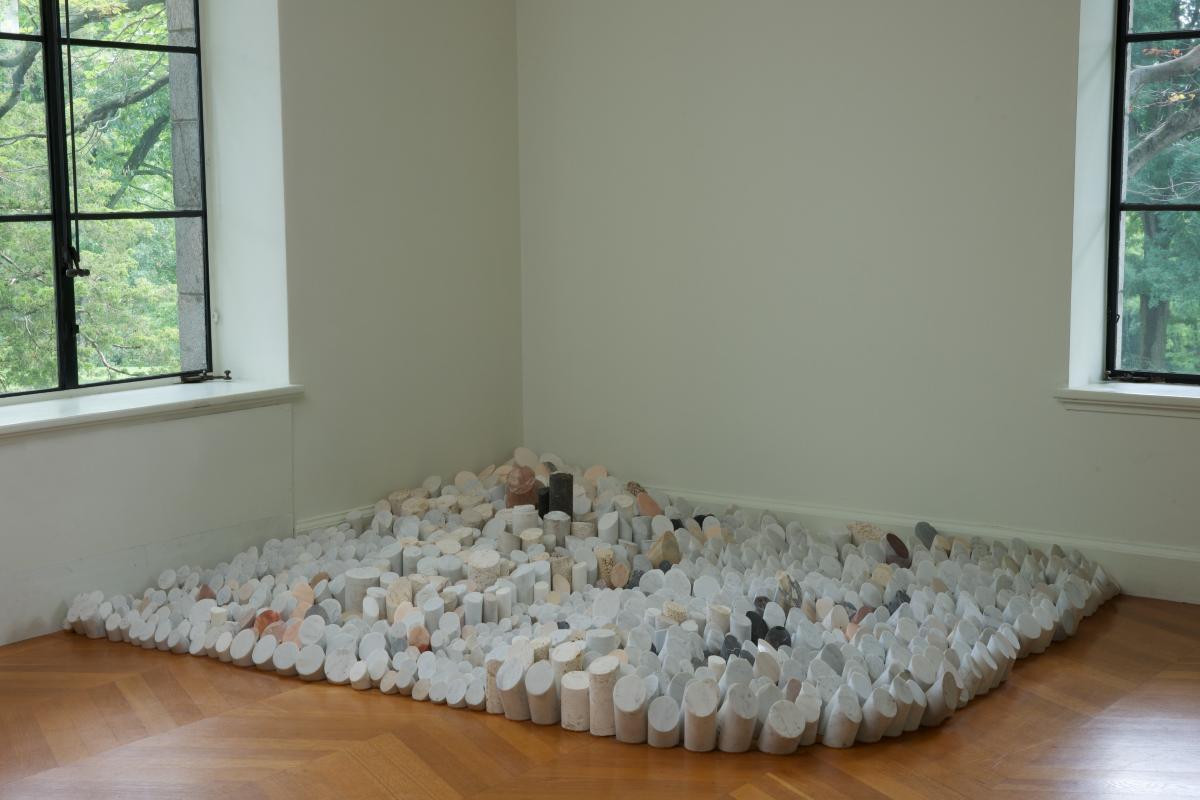 Louise Bourgeois
American, born France, 1911–2010
Number Seventy-Two (The No March), 1972
Marble
13 1/2 in. x 8 ft. 6 in. x 8 in. (34.3 x 259.1 x 20.3 cm)
Purchased with the aid of funds from the National Endowment for the Arts and gift of the Ralph E. Ogden Foundation
Louise Bourgeois © 2021 The Easton Foundation / Licensed by VAGA at Artists Rights Society (ARS), NY
Photo by Jerry L. Thompson
Number Seventy-Two (The No March) is one of Louise Bourgeois’s most complex and politically charged works. This intricate sculpture—a floor work made from 1,200 individual cylindrical pieces of marble and travertine—was created in homage to a non-violent protest against the Vietnam War. Bourgeois also imbued the work with a more universal meaning, noting: “The No March also means accepting you’re almost nobody. You have to merge with thousands like you.” The work is installed in a tightly packed rectangle in the corner of an indoor gallery in the Museum Building. Varying in size, color, and textures and cut at various angles, no piece is taller than fourteen inches. Number Seventy-Two (The No March) inspired a 2007 exhibition at Storm King comprised of a group of twenty works that demonstrate Bourgeois’s use of the clustered form.

Though often rooted in personal experiences—particularly her painful childhood and dysfunctional family—Bourgeois’s work deals poignantly and sometimes disturbingly with broad themes of anxiety, loneliness, betrayal, sex, and death. Her emphasis on organic forms, the subconscious, and states of metamorphosis can be traced to her interest in the French Surrealists; she had met and been influenced by Marcel Duchamp, Max Ernst, and André Breton while attending the École des Beaux-Arts in the 1930s. While much of her work may legitimately be viewed in the context of Surrealism, Abstract Expressionism, and other movements, Bourgeois was a singular artist whose work eludes categorization.

In 1938 Bourgeois moved to New York. There she created drawings, paintings, and prints with haunting, dreamlike scenes. Her first sculptures—tall, spindly wooden totems—date from the late 1940s. All but ignored when she exhibited with the Abstract Expressionists in the 1940s and ’50s, Bourgeois was rediscovered by feminists in the 1970s, and finally, at the age of seventy-one, received international recognition with a retrospective exhibition at the Museum of Modern Art, New York, in 1982.